AFF has always been interested in expanding the concept of film to include gallery work and artwork by artists. To this, we are proud to include the following works in the 2022 AFF program. 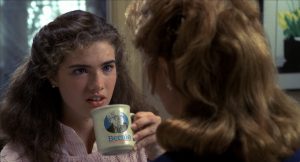 Comprised entirely of hundreds of pirated film samples, Hello Dankness is a bent suburban musical that bears witness to the psychotropic cultural spectacle of the period 2016 to 2021. Set in the American suburbs, the film follows a neighbourhood through these years as consensus reality disintegrates into conspiracies and other political contagions. Part political satire, zombie stoner film, and Greek tragedy, the work is also informed by the encrypted memetics of contemporary internet culture.

Hello Dankness is Soda Jerk’s third feature film and screens within Soda Jerk’s solo exhibition Open Sauce, which also includes screenings of their controversial political fable TERROR NULLIUS (2018) and a large-scale installation of THE WAS (2015), their video collaboration with The Avalanches.

Soda Jerk is a duo who make sample-based experimental films with a rogue documentary impulse. They are fundamentally interested in the politics of images; how they circulate, whom they benefit and how they can be undone.
When: 18 Oct – 16 Dec 2022
Opening Times: Tues – Sat 10am – 5pm
Where: Samstag Museum of Art, Hawke Building, City West campus, 55 North Terrace, Adelaide, 5000 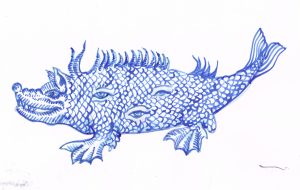 WAVE
This genre-defying work of art unites digital imagery, ceramics, and sound in an immersive 360-degree installation in the Elder Wing of the Art Gallery of South Australia. Gerry Wedd’s iconic ceramics and drawings are brought to life with an evocative soundscape composed by Gabriella Smart in this cinematic production co-directed by Wedd, Mark Patterson, and Smart, produced by Patterson with digital production by Jumpgate VR. Visitors are invited on an epic journey from sea to sky through this new form of storytelling that unites the mythic imagery of Wedd and sonic intensity of Smart.
When: 19 Oct – 8 Jan 2023
Where: Elder Wing, Art Gallery of South Australia 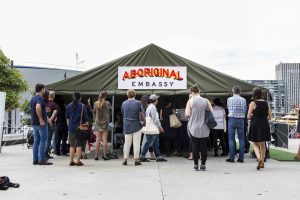 Presented as part of Tarnanthi, the Art Gallery of South Australia’s acclaimed celebration of Aboriginal and Torres Strait Islander art, Embassy by Richard Bell is inspired by the Aboriginal Tent Embassy, the protest camp set up 50 years ago on the lawns of Parliament House in Canberra.

This installation, exhibited on the AGSA forecourt, will feature film screenings and talks programmed in collaboration between Bell and Ngarrindjeri/Kaurna artist Dominic Guerrera. The installation will provide a platform to challenge preconceived ideas and stereotypes about Aboriginal people, art, and culture, with critic Terry Smith describing Embassy as “Dedicated to promoting Indigenous sovereignty on a worldwide basis.” Coinciding with the presentation of Embassy at AGSA is the premiere of the highly anticipated You Can Go Now: Richard Bell, directed by the award-winning filmmaker Larissa Behrendt AO.
When: 21-23 October, 11am and 2pm.
Where: Art Gallery of South Australia Forecourt.

In addition, AFF is excited to be launching a new initiative, AFF EXPAND Lab, to support the next generation of moving images makers alongside the announcement of the festival’s visual art program.

AFF EXPAND Lab will bring together visual artists, media artists, film and XR practitioners in a development lab with a commissioning outcome to be unveiled as part of AFF 2024, continuing the tradition of AFF’s history of delivering acclaimed development programs including Film Lab New Voices and HIVE. The inaugural AFF EXPAND Lab is a collaboration between Adelaide Film Festival, Samstag Museum of Art, Illuminate Adelaide, Art Gallery of South Australia and is supported by Arts SA and The Balnaves Foundation. Find out more about AFF Expand Lab.