We’re fascinated by the future. Whether it’s the future of science, space exploration or story-telling; there’s nothing better than exploring predictions of what’s to come. But what about the future of human relationships? We revisited five our favourite movies set in the future to see what they predict. 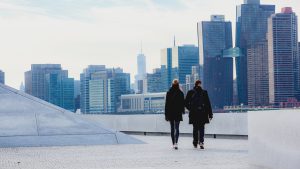 The year is 2805. Earth has become a desolate wasteland of neglect; a dumping ground of humanity’s transgressions. Amongst the rubbish, a robotic trash compactor named WALL-E is left to clean up the mess. Here he meets EVE, a slim-lined probe designed to skim the planet for any remnants of life. The two form an unorthodox symbiosis to each other, a mechanical flirtation which sends sparks flying from both ends. Think: Romeo and Juliet without the teen angst and familial warfare. Set amongst the backdrop of a stunning intergalactic future, our two star-crossed lovers must navigate their romance while facing institutional pressures of class and duty. It’s one of the most wholesome love stories on this list, with a child-friendly approach to relationships that balances the ups and the downs. It also helps that the protagonists are adorable robots.

Modern dating is made easier than ever with the arrival of sleek, sultry Operating Systems in near-future Los Angeles. Perpetual shut in and recent divorcee, Theodore Twombly (Joaquin Phoenix) acquires an OS named Samantha (Scarlett Johansson), an unseen presence initially designed to organise his life (she’s Siri but sexy). While we never see Samantha on-screen, she’s constantly present in Theodore’s hipster-fantasy lifestyle; following him on romantic dates around the city and meeting his friends. Jonze’s minimalist masterpiece is an ode to the convenience of modern dating. The OS is the thinking man’s Tinder, a strings-free system which enables users to fall in love at the touch of a button. Is it a cynical metaphor for the state of 21st century courtship? Who knows. All that’s important is we get to see a dazzling display of futuristic flirtation without aliens and space guns.

Riding the waves of futuristic love stories after Her, The One I Love is a mind-bending film with a beautiful aesthetic featuring indie darlings Mark Duplass and Elisabeth Moss. They play a frazzled married couple who seek to rekindle their romance with advice from a scrupulous therapist (Ted Danson). The couple are sent to a retreat away from civilisation, left with only themselves until some unexpected guests turn up to flip the film on its head. It’s not really a romantic comedy; it’s not really a thriller or drama. Commenting on the sanctity of marriage and partnership – with some rather troublesome obstacles – the film forces the characters to look in the mirror (watch the film to fully understand this reference) and confront the wrongdoings they have constantly committed towards one another. The future of marriage therapy is exciting, horrifying and absolutely out of this world.

Does artificial intelligence have the potential to feel emotion like we do? Alex Garland explores exactly that in this seminal sci-fi film starring Domhnall Gleeson as Caleb, a young programmer working for mysterious tech-wizard Nathan (Oscar Isaac) in his secluded glass condo filled with beautiful robots serving sushi and champagne. Nathan’s latest project, a female AI named Ava (Alicia Vikander) is designed to test and manipulate human emotions. Caleb is the guinea pig in this tantalising experiment, which blurs the lines between conventional understandings of man and machine. The film is a total neon fantasy of future romance: undeniably beautiful, terrifying (mostly down to Isaac’s dancing abilities…) and mind-blowing. Is the love we feel real or just another simulation? You decide.

After the breakup of his marriage, David (Colin Farrell) is sent to a hotel in the countryside for disillusioned singletons. David is given a choice: find a partner in 45 days or be transformed into an animal (he chooses a lobster if he should fail). Still recovering from his divorce, David can’t seem to find a spark with any of the women at the hotel. His rocky road to love is somewhat disrupted when he meets the “Short Sighted Woman” played by Rachel Weisz. The two are immediately drawn to each other, bonding over their shared dismay for society’s rules and bleak demise of their friends (David’s brother was turned into a yapping Border Collie). Although authoritarian forces threaten their relationship, the couple find a way to express their love through hand-gestures, stoic conversations and a love for trance music. Lanthimos is an expert artist of human emotions, illustrating that love is more than what we see at first sight.

Check out a sneak peek of the future with our sister event Hybrid World Adelaide from 20th – 24th July at the Adelaide Convention Centre.
Early bird Tech Conference tickets are available now.