Capital punishment simmers in a boiling pot of controversy. Amidst the political and religious debate surrounding the issue one thing sets tongues wagging more than the others – what do the condemned eat before their execution?
Last Meal presents a banquet of death row inmates’ final feasts and through them shines a light on our understanding of the individuals and the institutions meting out capital punishment.

In late 2021, Cinemache’s Last Meal (AFF 2020) was acquired by global media juggernaut VICE after being handpicked by VICE founder Suroosh Alvi. The film will screen in the second season of The Short List, which puts a spotlight on some incredibly diverse filmmakers and films from around the world.

The film, which received funding from the AFF Investment Fund, had its world premiere at the 2020 Adelaide Film Festival, and has gone on to screen in the Tribeca, Calgary, Hot Springs Documentary and Sydney Film Festivals.

Q: How did you first come across the idea of the last meal?
In the process of researching another project, it came to our attention that until 2003 the Texas Department of Criminal Justice had a page on their official website that recorded the last meal requests of death row inmates. What immediately caught our eye was the disclaimer stating that the meal requests may not reflect the actual final meal the prisoner was served. Perhaps naively, we had always assumed that within reason inmates received what they ordered. To us it was odd that they would publish a list of last meal requests on an official government website, only to add the disclaimer that rendered the list little more than a façade. This piqued our interest on the subject of last meals and was the initial spark that would fuel our obsession with telling the LAST MEAL story. We had to know more. 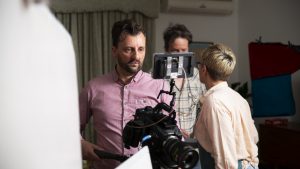 Q: So, is that what attracted you to the story?
We’ve always been attracted to stories that focus on an assumption or group of assumptions that when you scratch the surface, prove to be problematic and often false. For example, while focusing on the last meals of death row inmates, we found ourselves entering a discussion around the justification of the death penalty. You would think that when someone’s life is on the chopping block that no expense would be spared, that no stone would remain unturned in ensuring that they were in fact guilty of the crime. The exact opposite turned out to be true. It was quite shocking. It became abundantly clear to us that without advances in DNA technology many of those since exonerated would have been executed no questions asked.

Q: What else attracted you to the story?
Another aspect of the story that attracted us was that people appear to derive genuine perverse pleasure from knowing the last meal requests of prisoners, particularly serial killers. That kind of true crime salaciousness was fertile ground for our approach, particularly given, as previously mentioned, it was clear that a lot of the rationalization for capital punishment did not align with any of the available evidence. Overall, for what one might assume is a niche subject, researching last meals turned up a great deal of content that really fed and drove our curiosity. It was the type of project where, unfortunately, some great material was left on the cutting room floor.

Q: LAST MEAL is not your standard talking-head true-crime documentary. Can you speak to the narrative techniques you used to deliver the story to the screen?
For us content and form go hand in hand, so the idea of shooting stylized recreations of the last meals was there from the outset. Our thinking was that it would be really interesting to lean into the way in which fast-food brands present their products as handmade, personalized and high quality when in reality they are mass-produced, standardized and low-cost. Similarly, last meals are served on plastic trays and made with whatever ingredients the prison kitchen happens to have on hand at the time. However, when you read the request list people tend to picture something quite extravagant, even luxurious. We wanted to play around with that contrast – mixing mouthwatering food design with sickening descriptions of crimes and the confronting realities of the death penalty. It’s funny, if you viewed the food in another context, say as part of a commercial, you would have a very different reaction to it. We loved that. The idea of taking something you might
normally find very appealing and then not only subverting it but also redefining it. 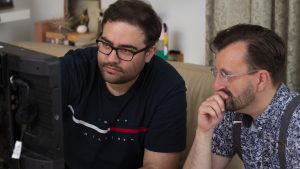 Q: I love that the story starts in one place and then ends up in another. Can you speak a little bit about that without giving too much away?
Serial killers are the fast food of true crime. They have instant brand recognition with audiences and are a cheap and easy entertainment option. Their popularity is precisely why we open the film with their crimes and last meals. We wanted audiences to have that early buy-in before the film transitions into harder-hitting aspects of the death penalty. Our goal was neither to make a YouTube style video that just offered interesting or salacious facts nor a piece that only served to preach to the converted. The aim was always to invite in the audience and have them engage with our investigation of the death penalty. We like to challenge people’s preconceptions, but we are also storytellers. Taking an audience on a journey – starting in one place and ending in another – is the most important facet of our work.

Q: What did you want the film to say?
With LAST MEAL we tried to drive home that you shouldn’t believe everything you’re told, irrespective of the authority dispersing the information. It’s a really prevalent feature in many of the cases where the defendant was eventually
exonerated. Jurors often assumed that the individual paraded in front of them was automatically guilty, based on the belief that the State wouldn’t prosecute an innocent person. So much of what we take for granted really hinge on this type of thinking. Given the current political climate, and the escalation of fake news, these themes seem even more prescient today. 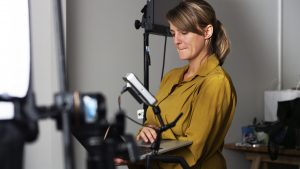 Q: Have you worked with Marcus and Daniel before?
I have worked with Daniel on a variety of his solo projects, but LAST MEAL is the first time I’ve collaborated with Marcus and Cinemache in an official capacity. Previously I have provided feedback and support for the pair on several of their
films, but with LAST MEAL it felt like the right time and project for us to come together and collaborate.

Q: So how did you get involved in LAST MEAL as a Producer?
Marcus and Daniel had been throwing around the idea for a while, and when they approached me with the concept it immediately struck me as something I had to be involved in. It was incredibly compelling, and the format they were proposing was unlike anything I had seen before. Usually when that happens you just say yes. Their initial concerns for getting the film made surrounded the food styling and commercial photography components of the shoot, as there were a
lot of moving parts to organise. Given my documentary and commercial producing experience, Daniel and Marcus knew I could help them bridge the gap between their vision and the logistical puzzle of getting the film made. Once onboard
the project, the three of us set about refining the creative vision and really nailing down the story we wanted to tell.

Q: How was the experience of making the film?
As I’ve said there were a lot of moving parts involved. On top of that we had to navigate the outbreak of a worldwide pandemic, where production protocol was changing daily. Surrounding ourselves with such a proficient team allowed us to
continue production and get through the shoot component unaffected by outside influences.
One thing that I really started to notice during the process of making the film was the lengthy discussions I found myself involved in when people asked me what I was working on. Everyone I ran into during development wanted to talk about
the topics we were exploring in the film. Friends, family members and even my hairdresser had opinions on last meals, the death penalty and crime in America.
The film had this “water-cooler” aspect to it, where everyone immediately engaged with the topic and wanted to jump into the debate. It was thrilling to see, as I knew we had really tapped into something.