Horror film fans were overnight treated to a tantalizing first image from upcoming flick Talk To Me, the debut feature film from Adelaide Youtube superstars RackaRacka. 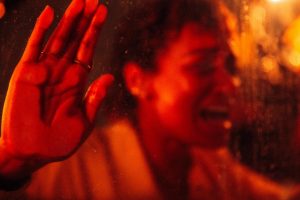 The film recently wrapped shooting in Adelaide, and is now entering post-production before its world premiere at the 2022 Adelaide Film Festival this October.

Talk To Me is directed by twin brothers Danny and Michael Philippou, whose darkly comic Youtube videos have been watched over 1.5 Billion times and amassed over 6.6 million subscribers. Hailing from Adelaide’s northern suburbs (also where most of their videos were filmed, including the infamous ‘Underwater Car’ stunt),  in 2015 the channel was awarded Best International YouTube Channel at the 6th Streamy Awards.

Talk To Me was written by Danny Philippou, along with regular collaborator Michael Beck, and stars the fierce new talent Sophie Wilde, alongside a stacked cast of Miranda Otto (The Lord of the Rings), Alexandra Jensen (Amazing Grace, The Letdown) Marcus Johnson and Zoe Terakes.

The promo still is in addition to the already announced plot summary:
When a group of friends discover how to conjure spirits using an ancient embalmed hand, they become hooked on the new thrill, until one of them goes too far and opens the door to the spirit world. Increasingly haunted by supernatural visions, the friends unwittingly prompt a devastating possession, forcing them to choose who to trust: the dead or the living.

The producing team from Causeway Films will be well known to Australian horror film fans, having produced the internationally acclaimed spook-fests The Babadook, The Nightingale (AFF 2018) and Cargo (AFF 2018).

Talk To Me received production investment from Screen Australia, in association with the South Australian Film Corporation (SAFC), and financed with support from the AFF Investment Fund, Hold Standard and KOJO Studios.

The 2022 Adelaide Film Festival will run 19-30 October. The full program, including details of Talk To Me‘s debut, will be released in September. Subscribe to stay up to date with all further announcements.