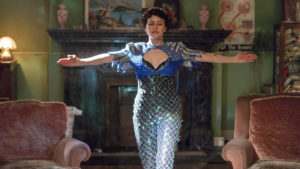 Alia Shawkat is one of Hollywood’s most talented and consistently changing performers. Whether you know her from the hilarious Arrested Development or the criminally underrated, Ethan Hawke-directed, Blaze, Shawkat is a phenomenal talent.

Shawkat stars in the Sophie Hyde’s comedy, Animals, based on Emma Jane Unsworth’s novel of the same name. In the film, Shawkat plays Tyler, a truly hysterical and utterly real character. When asked how the role appealed to her, Shawkat stated the following:

“She’s vivacious, entertaining woman who feels comfortable having a lot of attention on her. I think she’s a very loyal person. She’s always up for a good crack. I think that’s the term. Yeah, I’m putting it the right way. She wants to live life to the fullest. And in her mind, indulgence is not anything to look down upon. I think she wants to eat life and suck the marrow out of it.

She is also somebody who has a past and a darkness about her that she’d rather escape from than deal with, which makes it tricky to have healthy relationships and also to be able to think of other people, like someone like Laura, who’s her best friend.” For Shawkat, this was a role (and film) that she simply has not seen done before. With the recent “female-led” movement in Hollywood, it is a surprise that one as human and natural as Animals has not yet hit the silver screen. Regarding this, Shawkat revealed:

“This isn’t necessarily a feminist film. It’s just a film about women. But the feminist struggle has many waves to it, and it rises and falls and rises and falls over and over again until people realize we’re more than half the population, and we’ll just eventually dominate. But until that happens, this is just, yeah, another wave of feminist discussion, feminist work, feminist laws. You know what I mean? All these things that we’re still fighting for. So yeah, of course, the film is relevant right now.”

You can check out Shawkat’s phenomenally funny performance in Sophie Hyde’s Animals at the Adelaide Film Festival Pop Up event from 5-7 April. Tickets are available now!